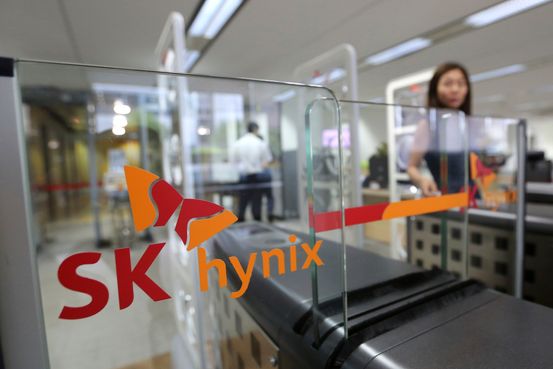 for roughly $10 billion, in a move that would reorient the semiconductor giant away from an area of historical importance that has become increasingly challenged.

The companies are discussing a deal that could be announced as soon as Monday, according to people familiar with the matter, assuming the talks don’t fall apart at the last minute. Specifics of the transaction, including exactly what SK Hynix would be buying, couldn’t be learned.

The Intel unit makes NAND flash memory products primarily used in devices such as hard drives, thumb drives and cameras. The U.S. chip maker has been weighing getting out of the business for some time, driven by sagging prices for flash memory.

While Intel is best known for making the central processing units at the heart of personal computers, the company has deep roots in the memory business. It started as a memory manufacturer in the late 1960s before stiff competition from Japan’s burgeoning electronics industry in the 1980s led the company to change course.

The market for memory chips slumped in 2018 amid an oversupply of the devices, though it began to recover late last year. Analysts expect the market for NAND devices to remain strong in the coming years amid a surge in data storage.

Nonetheless, Intel Chief Executive Bob Swan said in April that the company had to generate more attractive returns from the NAND business and suggested it could enter into a “partnership” to make that happen.

George Davis, the California-based company’s chief financial officer, said in March that while there were growing markets for flash memory, including in huge data centers, “We haven’t been able to generate the profits out of that to get the kind of returns that we would like to see.”

bought out Intel’s share in a joint venture for about $1.5 billion. That venture was focused on an advanced memory technology called 3D XPoint.

Intel, which has a market value of roughly $230 billion, has been under increasing pressure as smaller rivals gain market share. Its stock is down about 10% this year, compared to a roughly 30% rise in the PHLX Semiconductor index. The shares dropped more than 15% when Intel in July indicated that second-half results would be weaker than expected and revealed further delays in the rollout of its superfast seven-nanometer chip technology, which underlies future generations of central processing units.

While Intel has struggled to move into mass production of its most advanced chips, rival Advanced Micro Devices Inc.’s market share in personal computer CPUs climbed above 17% in the first quarter, more than doubling from five years earlier, according to Mercury Research. Intel holds almost all of the remaining market share.

Intel is set to report its third-quarter earnings Thursday afternoon.

The market for memory chips has been shaken by U.S. efforts to curb the rise of China’s tech industry and restrict exports to Chinese firms such as Huawei Technologies Co., the country’s leading telecom equipment maker. Japanese memory-chip maker Kioxia Holdings Corp., owned by a consortium led by private-equity firm Bain Capital, last month delayed one of this year’s most anticipated public offerings because of the situation.

Intel’s advanced flash memory, referred to as 3D NAND because it has multiple layers of memory cells stacked on top of each other, is produced in Dalian, China, a port city on the Liaodong Peninsula just west of the Korean Peninsula.

That factory is Intel’s only major chip-manufacturing site in China and if it is included in the sale it would mark a serious reduction of the company’s presence there.

The U.S. recently required companies to obtain licenses before exporting some technology to China’s most advanced chip maker,

Consolidation has swept through the semiconductor sector as industry players seek scale and expand their product portfolios to support the increasing number of everyday items that are connected to the internet.

in July agreed to pay more than $20 billion for

in September agreed to pay $40 billion for Arm Holdings, the British chip designer backed by

AMD is in talks to buy rival chip maker

The Wall Street Journal reported earlier this month. The two parties are discussing a deal that could come together this week or next, assuming talks don’t fall apart, according to people familiar with the matter.

Some companies are looking to slim down and narrow their focus.

last year explored a sale of its radio-frequency, or RF, unit, a segment of its wireless-chip business that makes filters used in cellphones to clarify signals. It later decided against selling it.

—Asa Fitch contributed to this article.

Getting to Know, and Like, My Natural Hair Texture in Quarantine

The city of lights glows teal for cervical cancer elimination

Getting to Know, and Like, My Natural Hair Texture in Quarantine

The city of lights glows teal for cervical cancer elimination