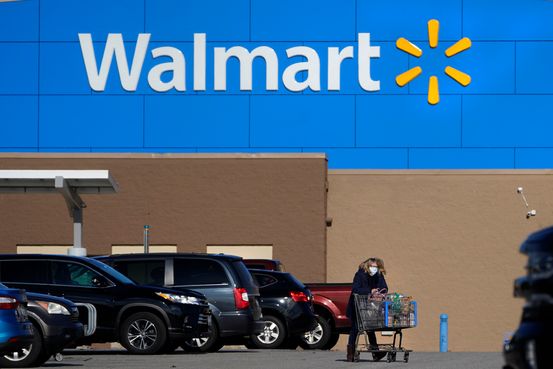 Tuesday, accusing the retail giant of helping to fuel the nation’s opioid crisis by inadequately screening for questionable prescriptions despite repeated warnings from its own pharmacists.

The Justice Department’s lawsuit claims Walmart sought to boost profits by understaffing its pharmacies and pressuring employees to fill prescriptions quickly. That made it difficult for pharmacists to reject invalid prescriptions, enabling widespread drug abuse nationwide, the suit alleges.

Walmart responded in a public filing Tuesday, saying the lawsuit “invents a legal theory that unlawfully forces pharmacists to come between patients and their doctors, and is riddled with factual inaccuracies and cherry-picked documents taken out of context.”

“Blaming pharmacists for not second-guessing the very doctors [the Drug Enforcement Administration] approved to prescribe opioids is a transparent attempt to shift blame from DEA’s well-documented failures in keeping bad doctors from prescribing opioids in the first place,” Walmart said, adding that it “always empowered our pharmacists to refuse to fill problematic opioids prescriptions, and they refused to fill hundreds of thousands of such prescriptions.”

The country’s largest retailer by revenue, Walmart has been expecting this complaint and sued the federal government in October to fight the allegations pre-emptively. That suit accuses the Justice Department and DEA of attempting to scapegoat the company for what it says are the federal government’s own regulatory and enforcement shortcomings.

The Justice Department’s lawsuit alleges Walmart created a system that turned its network of 5,000 in-store U.S. pharmacies into a leading supplier of highly addictive painkillers. The allegations date to June 2013, according to the suit.

“Many of these prescription drugs would never have hit the streets if Walmart pharmacies had complied with their obligations,” said

a U.S. attorney in Tampa, Fla., who is one of several prosecutors involved in the suit.

Many of the alleged problems centered in Walmart’s compliance unit, which oversaw dispensing nationwide from the company’s main office in Bentonville, Ark., the suit says. Walmart allegedly ignored repeated warnings that the company had understaffed its pharmacies as pressure to sell quickly caused mistakes and put patients’ health at risk, according to the complaint.

Pharmacists allegedly got little help from compliance managers who for years didn’t share information between stores, and in many cases refused requests to give blanket rejections to suspect prescribers even after rival retailers had done so, the suit says.

“Rather than analyzing the refusal-to-fill reports, the compliance unit viewed ‘[d]riving sales and patient awareness’ as ‘a far better use of our Market Directors and Market Manager’s time,’” the Justice Department said, quoting a company compliance director. “Given the nationwide scale of those violations, Walmart’s failures to follow basic legal rules helped fuel a national crisis.”

In one instance, the suit says, pharmacists allegedly warned superiors that Walmart stores in Texas and Oklahoma were “getting slammed” by suspect prescriptions from a doctor in East Texas who was under federal investigation and that other stores had cut off his clients. One of the pharmacists said the doctor took most payments in cash and refused to answer questions from the pharmacy.

In reply to one of the alleged warnings, a Walmart compliance officer wrote in a December 2014 email that “an investigation of itself is not a good reason to discontinue filling legitimate prescriptions,” according to the lawsuit.

The government alleges that Walmart pharmacies continued filling this doctor’s prescriptions for another three years—roughly 14,700 from 2014 to 2017, an average of more than 13 a day, for more than 1.5 million doses. The doctor was later convicted of Controlled Substances Act violations, among other federal crimes, and sentenced to 20 years in federal prison, the suit said.

In its response, Walmart said that it blocked thousands of questionable doctors from having their opioid prescriptions filled at its pharmacies.

In its own lawsuit, Walmart said nearly 70% of the doctors that the federal government identified as problematic continue to have active DEA registrations.

“In other words, defendants want to blame Walmart for continuing to fill purportedly bad prescriptions written by doctors that DEA and state regulators enabled to write those prescriptions in the first place and continue to stand by today,” the retailer said in its suit.

Walmart is one of several other large companies that have been targeted in such lawsuits, filed by more than two dozen states and many local governments that claim aggressive marketing of prescription painkillers helped fuel the crisis.

The Justice Department is taking action to help get Walmart to recognize the role it must play in fighting the opioid crisis,

acting chief of the department’s Civil Division, said in an interview.

“It’s not isolated or left off the hook just because the pill-mill doctor writes the prescription,” Mr. Clark said. “Pharmacists have a duty not to just fill whatever prescription comes in the door.”

The government’s lawsuit portrays a company in which line pharmacists allegedly faced stresses from managers’ pressure and from an unfolding crisis they witnessed firsthand. Alleged company orders to work quickly didn’t allow them to scrutinize each suspect prescription, and they repeatedly sought permission to use blanket rejections against clinics they believed to be obvious pill mills, the suit says.

“If all of us got together and started filling out refusal to fill” forms for one pill-mill prescriber, “that is all we would do all day long,” one Walmart pharmacy manager in Texas wrote in an Feb. 6, 2015, email to a director in the compliance unit, the suit says. “Other chains are refusing to fill for him which makes our burden even greater. Please help us.”

The compliance unit allegedly rejected that request and many others, telling pharmacists they could decide only on a case-by-case basis, according to the suit. That effectively led Walmart pharmacists to supply abusers—and encouraged more doctors to send patients to Walmart pharmacies—the government alleges, because they didn’t have time to review and complete the required paperwork for thousands of individual rejections.

Walmart later reversed course and allowed blanket rejections for suspect prescribers, the suit says. It doesn’t say when, other than to note that the company followed other major grocers and pharmacy chains that gave that power to their pharmacists already.

The Justice Department previously launched a parallel criminal investigation, based out of the U.S. attorney’s office for the Eastern District of Texas, related to Walmart’s dispensing of opioids. The department’s leadership in Washington decided in 2018 against bringing charges, focusing instead on a civil lawsuit, according to a person familiar with the matter.

The U.S. saw about 50,000 fatal opioid overdoses in 2019, according to federal data, a record high that reversed what had been a brief reprieve from steady increases a year earlier. The Centers for Disease Control and Prevention last week cited mounting evidence that the crisis is worsening during the pandemic, which has complicated treatment while increasing isolation and stress.

to bring a federal lawsuit against drug companies that “are really sending opioids at a level that it shouldn’t be happening.”

Since then, Purdue Pharma LP has pleaded guilty to three federal felonies related to the marketing and distribution of its powerful opioid painkiller OxyContin. That came as part of an $8.34 billion settlement with the Justice Department.

—Sarah Nassauer contributed to this article.

Write to Timothy Puko at tim.puko@wsj.com and Sadie Gurman at sadie.gurman@wsj.com