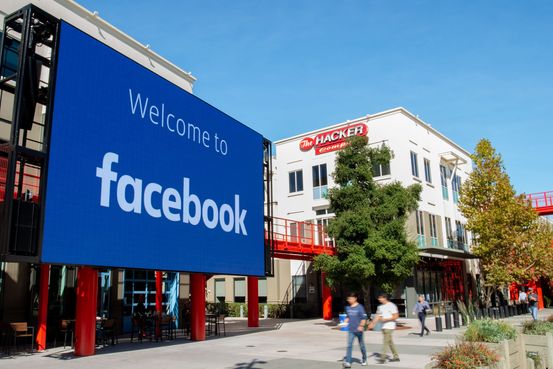 Facebook Inc. posted record revenue and profit in the fourth quarter while warning of challenges including growing friction with

said is increasingly one of his company’s biggest competitors.

Apple and Facebook have tussled in recent years on issues ranging from data collection to app-store fees, though the latest flashpoint is centered on the iPhone maker’s plan to enable users to opt out of third-party apps from collecting certain data—a move Facebook has said could hamper its ad-targeting capabilities.

As Facebook has grown to become the world’s largest social network, with roughly 1.85 billion daily users in the latest quarter, it has become an online advertising behemoth through its ability to harness the reams of information users share and help businesses to reach narrow bands of users based on their internet behavior.

On an earnings call Wednesday with analysts, Mr. Zuckerberg uncharacteristically lambasted Apple during his opening remarks, saying the iPhone maker has made misleading claims about user privacy and that the new rules around advertiser tracking will hurt small businesses. Apple has defended itself, saying it doesn’t plan to prohibit such tracking but that it will simply require app makers to obtain users’ permission to do so. The initiative has rankled the broader advertising community.

Mr. Zuckerberg also said Apple and Facebook are likely to collide as competitors on other fronts in the years ahead, including in categories such as immersive computing as well as messaging. He described Apple’s iMessage as the largest U.S. messaging platform by default because it comes pre-installed on iPhones.

“Apple may say they’re doing this to help people,” he said about the iOS 14 plan. “But the moves clearly track their competitive interests.”

Facebook executives said they expect Apple to roll out the operating system changes starting in the current quarter and weigh on what was expected to be a stronger period for advertising compared with the early months of the pandemic in 2020.

In the latest quarter, online holiday shopping and increased use of the company’s platforms during the pandemic drove stronger-than-expected growth in Facebook’s ad business. It posted revenue of $28.07 billion, up from $21.08 billion in the final quarter of 2019. Profit rose 52% to $11.22 billion, or $3.88 a share. Both measures exceeded analysts’ projections.

which all are due to release their quarterly financial reports next month.

Facebook has been in a yearslong push to position its platforms as a must-use for large advertisers to reach its billions of users world-wide but also as a home for small businesses to engage with customers and for individual sellers to market their goods. Revenue from the category that includes Facebook Marketplace and the company’s virtual-reality business more than doubled in the latest quarter from a year earlier to $885 million.

“This means that small businesses showed up in the fourth quarter,” said AB Bernstein analyst Mark Shmulik, who anticipates a more permanent shift to digital advertising for such firms. “I have an expectation that the majority will stick around.”

Facebook said it was adding up to $25 billion to its existing stock-buyback program. Shares in the company declined 2% in extended trading. Facebook’s shares have lagged behind the Nasdaq Composite Index over the past three months.

The latest results are also unlikely to quell concerns among critics with the parent of Facebook, Instagram and WhatsApp and the market power it holds. The company said 2.6 billion people a day, or roughly one in three world-wide, used one of its platforms in the holiday quarter.

What do you find most noteworthy about Facebook’s quarterly report? Join the conversation below.

Still, Facebook’s daily users in the U.S. and Canada fell for a second consecutive quarter to 195 million, which eMarketer analyst Debra Aho Williamson attributed to mounting competition from rival social networks. People in those markets “are starting to move their social time and engagement elsewhere,” she said, citing TikTok as a likely example.

Facebook is grappling with other challenges. Last month the Federal Trade Commission and 46 states filed antitrust lawsuits against the company, accusing it of buying and freezing out small startups to choke competition. Facebook has disputed claims presented in the lawsuits, describing them as revisionist history and defended its acquisitions as good for competition, advertisers and consumers.

Mr. Zuckerberg and other company executives on the call didn’t mention former President

who was banned earlier this month from Facebook and Instagram after he made posts encouraging protests at the U.S. Capitol that led to a deadly riot. Facebook recently referred the matter to an independent committee to determine whether Mr. Trump should be allowed back.

The Facebook chief said the company is considering steps that could reduce the amount of political content that appears in users’ news feed but that it wants to continue enabling people to engage in political groups and discussions if they want.

Analysts have been looking for signs that Facebook is making progress in efforts to expand its business beyond advertising in areas such as e-commerce and virtual reality. On the earnings call, Mr. Zuckerberg said the company’s short-form video feature Instagram Reels is gaining traction with users and that Oculus headsets were a popular holiday gift item.

Facebook’s e-commerce play could yield big benefits in the long run, analysts say. Instagram Shopping and Reels and Facebook Marketplace could be responsible for $3 billion of additional revenue for the company this year, according to a recent note from

The note cited a survey that found about a third of Americans use Shopping and Reels monthly while more than half use Marketplace.