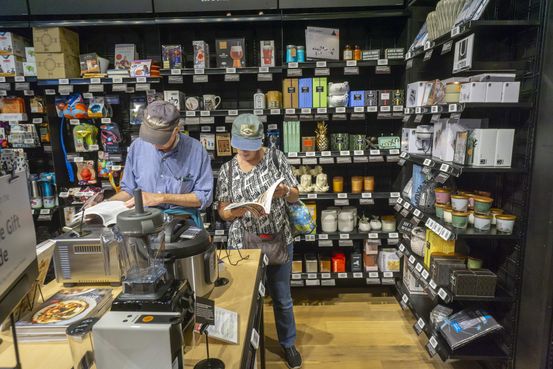 A group of Republican senators is asking

to explain why it recently removed a book about transgender issues that had been on sale on the platform for about three years.

In a letter to Amazon Chief Executive

of Florida, Mike Lee of Utah, Mike Braun of Indiana and

of Missouri said a book by conservative scholar Ryan T. Anderson, “When Harry Became Sally: Responding to the Transgender Moment,” was no longer available on Amazon nor on its Kindle and Audible platforms.

Amazon, they wrote, has been “unable to provide a sufficient explanation” as to how the book “supposedly violated a vague, undefined ‘offensive content’ standard.”

An Amazon spokeswoman didn’t have a comment regarding the letter. The company declined to provide specifics regarding its decision, saying in a statement earlier Wednesday that it reserved the right not to sell certain content based on its content guidelines for books.

“All retailers make decisions about what selection they choose to offer and we do not take selection decisions lightly,” the statement said.

In their letter, the senators wrote that Amazon’s move “openly signaled to conservative Americans that their views are not welcome on its platforms.” They requested the company provide documentation explaining its decision, including whether the book violated an Amazon policy.

Amazon is the country’s dominant book retailer, accounting for 53% of all books sold in the U.S. and 80% of all ebooks, according to recent 30-day sales data from Codex Group LLC, a book audience research firm. Amazon’s dominance means any decision to remove a title can have an outsize effect on the book’s sales.

In an interview Wednesday, Mr. Anderson said that because of his professional status—he is president of the Ethics and Public Policy Center, a conservative think tank based in Washington, D.C.—he has been able to draw attention to Amazon’s treatment of his book. Other authors, he said, may not be as fortunate. “I can make lemonade,” he said. “But how many others have had their book delisted that we never heard of?”

A spokesman for Encounter Books, a nonprofit based in New York City which publishes “When Harry Became Sally,” said Wednesday that it had been informed by its distributor that the book was removed for violating Amazon’s content guidelines.

Under the category “Offensive Content,” Amazon’s content guidelines include a sentence that reads: “We don’t sell certain content including content that we determine is hate speech, promotes the abuse or sexual exploitation of children, contains pornography, glorifies rape or pedophilia, advocates terrorism, or other material we deem inappropriate or offensive.”

Mr. Anderson said he first learned that his book was no longer for sale on Sunday afternoon after a would-be book purchaser called him to say they couldn’t find the book on Amazon. Mr. Anderson then looked and also couldn’t find it.

“It’s hard to understand,” said Mr. Anderson. “As far as I know I haven’t done anything. The book has been saying the same thing for three years.” The book, which focuses on a variety of issues including gender identity, was originally published in February 2018.

In a tweet Wednesday, Mr. Anderson thanked the group of Republican senators for their support.

Leading tech platforms have been under criticism for implementing bans or suspensions of conservative figures.

Google also recently took steps to boot Parler, a social-media app and website that has grown in popularity among conservatives. The actions against Mr. Trump and Parler starkly illustrate the companies’ influence over conversation online—and the political nature of their decisions. While lauded by many, ejecting the president and some of his supporters also infuriated others who said it amounts to censorship.

Amazon has gotten pushback before over which books it allows on its platforms. In June, journalist and author Alex Berenson said a booklet he had written about the coronavirus pandemic had been rejected by Kindle Direct Publishing, Amazon’s self-publishing arm. In the booklet, Mr. Berenson argued that estimates about the deadliness of the disease had been overstated and that lockdowns have been counterproductive.

criticized Amazon’s decision on Twitter at the time, and Amazon later said in a statement that “the book was removed in error.” A day later, the self-published booklet was No. 2 on Amazon’s Kindle Store bestseller list.

A longstanding truism in the book business is that the only bad publicity is no publicity, and that appears to be true for Mr. Anderson as well. The print edition is now sold out at BarnesandNoble.com, but on late Wednesday afternoon the ebook ranked No. 3 on the bookseller’s Top 100 list for digital books.

A spokesman for Encounter Books on Wednesday said the publisher has reordered 5,000 paperback copies.

Write to Jeffrey A. Trachtenberg at jeffrey.trachtenberg@wsj.com